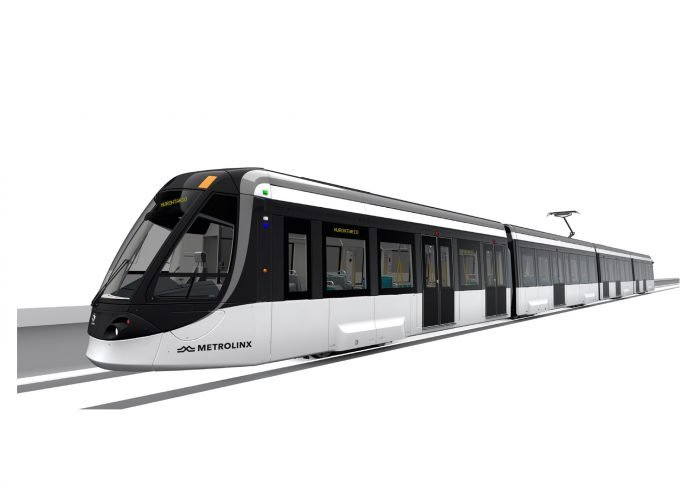 Metrolinx has chosen the Alstom Citadis Spirit light rail vehicles configured to carry 120 seated and 216 standing passengers, with a length of up to 157 feet, with a white and silver colour theme for the exterior.

Currently, Alstom is the supplier of light rail vehicles for Ottawa’s Confederation Line, a light rail system built by that city at a cost of just over $2.1 billion, with a second phase planned that will push the final bill up to $5.1 billion. The costs for the project are being funded in part by the federal government and the province, while the City of Ottawa is funding a third, or $1.7 billion.

In 2015, the City of Brampton considered a proposed plan to build the Hurontario-Main LRT from the Port Credit GO Train Station in Mississauga to the GO Train Station in Downtown Brampton. The plan was scheduled to cost a total of $1.6 billion, and the Province of Ontario had committed to paying the full amount.

Following a marathon public meeting at the Rose Theatre where a majority of residents who delegated at the meeting spoke in favor of the project, Councillors voted against the plan, and instead chose to stop the train at Shoppers World.

The decision resulted in the city looking at alternative unfunded routes, including an Etobicoke Creek route that was barred from moving forward after the Toronto Region and Conservation Authority voted down the idea, calling the plan “nuts”. The remaining route options lie along Kennedy Road and McLaughlin Road.

Despite the fact that the other routes have already been studied and dismissed by experts, Council voted to spend another $4.4 million to initiate new studies that will require at least four years to complete.

In the meantime, the City of Mississauga is forging ahead with its light rail transit system, and, from the look of the images they are sharing, Mississaugans will soon be enjoying a fast, efficient and fully paid transit line along their main corridor.

In earlier concept images, Metrolinx had showcased an LRV model built by Bombardier’s rail division located in Thunder Bay, Ontario. However, Bombaridier has experienced challenges with delivery times for other projects like the Crosstown LRT which is being built in Toronto.

Anne Marie Aikens, a spokesperson for Metrolinx says the switch to Alstom was made to ensure success of the project. “We contracted with Alstom to provide vehicles for our other LRT projects, like Hurontario, so that we will have that certainty.”

The Alstom trains feature a low-floor design that offers easy accessibility from the street or the curb, as well as an interior layout without steps or ramps to provide a safe and enjoyable experience for riders.