As Canada celebrates its 150th birthday, Brampton’s population is nearing 600,000 residents. In the last few years, the city’s population has increased substantially, with 593,638 residents now calling the city home, according to data released by Statistics Canada.

Census packages were delivered across Canada in May of 2016, the first time since 2011, the last year the long-form census was administered. 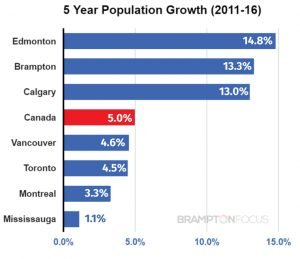 In the previous 2011 census results, Brampton’s population stood at 523,906 residents. Since that time, Brampton’s growth of 13.3% has outpaced that of many other notable cities like Mississauga (1.1%), Vancouver (4.6%), Calgary (13%), Montreal (3.3%), and Toronto (4.5%), maintaining its position on the list of fastest-growing municipalities in Canada. Edmonton surpassed Brampton with a growth of 14.8%.

Overall, Canada’s population grew 5% to 35,151,728, about two-thirds of that growth resulting from immigration, and the remainder due to new births. It is expected that by 2051, 92% of population growth will be due to immigration.

Following the 2015 Federal Election, the Liberal government restored the long-form census with the aim of providing decision makers with the most up-to-date information on population, demographics, and other important statistical markers.