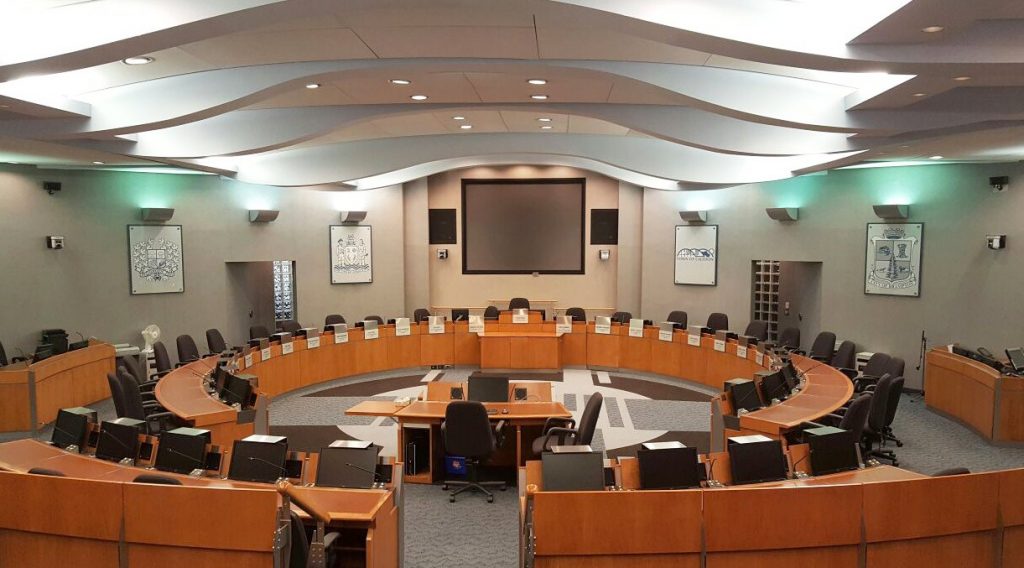 Exasperated Mississauga and Caledon councillors could do nothing but watch as divisions between Brampton councillors played out at a regular meeting of the Region of Peel today.

At different points, Councillors yelled and accused each other of not following procedural rules, while others rose on points of order. The political spectacle and bickering, while common at Brampton City Hall meetings, is very rare at the Region of Peel, and underlines the divisions that exist between Brampton’s elected representatives, in stark contrast to the unity and order exemplified by representatives of both Caledon and Mississauga.

At the heart of the issue was a report from the Integrity Commissioner on a code of conduct complaint originally filed by Regional Councillor John Sprovieri against Brampton Mayor Linda Jeffrey, stemming from a decision made at a Regional Council meeting last December, to have the Mayor reimbursed for $18,475 in legal fees that she incurred for obtaining a legal opinion related to a potential conflict of interest in another matter.

In his complaint, Regional Councillor Sprovieri alleged that the Mayor violated the Municipal Conflict of Interest Act by attempting to influence the outcome of the vote by phoning two other members of Regional Council, namely, Mississauga Mayor Bonnie Crombie, and Councillor Martin Medeiros, asking them to move and second a motion to have the legal fees reimbursed.

The decision was made in closed session, and Mayor Linda Jeffrey, as required by the Municipal Conflict of Interest Act, recused herself at the time that the matter was brought to Council for consideration.

In his decision, Robert Swayze, the Region’s Integrity Commisioner, found that he had no jurisdiction to make a ruling against the Mayor, but did say in his written opinion that she “made an innocent error in judgement”.

Not satisfied with the report, Councillor Sprovieri attempted to reopen the matter, with a request that the matter be referred to the Ontario Ombudsman, while Councillor Elaine Moore demanded that the Mayor reimburse the Region for the legal fees.

Tempers flared and several members rose on point of order to challenge whether correct procedures were being followed. The exchange was chaired by Chris Fonseca, Councillor for Mississauga Ward 3, who did her best to maintain order as well as her own composure throughout the entire exchange.

Watch the video of the exchange below.